Hats off to Pristina’s unseen heroes – the Garbage collectors

We may not give them much thought. In fact, we may resent them as their truck blocks the road for a minute or two. They are the city garbage collectors, and looking at the amount of garbage we produce and they collect, well, I think at least, they deserve our gratitude.

These few containers serve our entire neighborhood. The number of bins was probably adequate once, when the neighborhood was made up of a dozen one-family houses. But now, hundreds of households have been added, and with them tons of more waste, as a result of excessive construction.

Garbage trucks can no longer enter the crowded, narrow streets, forcing the inhabitants to carry their household waste to these eight precious bins. Some even use their fancy cars to transport garbage. There is just something about quality of life that’s gone missing here. Or people create new bins out of concrete sewage pipes or drop the bags around the corner, hoping for somebody else to deal with them. 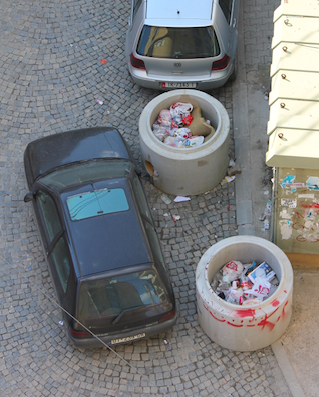 Back at the bins, household waste is topped up with construction materials, cloths, old furniture and the occasional broken toilet seat. No recycling here. Except for the occasional poor person plowing through the plastic bags in search of cans and tins. Food and bread, still deemed ok to eat, are left for the poor in plastic bags hanging on the side of the bins. Poverty has a real face in Kosovo, if you just care to have a look around.

According to a report of World Health Organization (WHO) an estimated 7% of the people in Kosovo are disabled, putting them in the group of least employable persons. About 37% of the population lives in poverty (less than €1.42/day) and over 17% lives in extreme poverty (below €0.93/day) according to the UNDP Kosovo Human Development Report 2012.

Most recently, a butcher shop must have decided to drop off the leftovers of butchered cows and goats, to the delight of the local dogs, and crows. Every two weeks a small digger cleans up the heavy garbage left beside the bins. Disinfection powder is sprayed all around to stop the spread of disease. It’s an impressive show of public services being applied in a professional manner.

However, as Pristina grows it is difficult to see how the garbage situation will improve without significant investments in its waste treatment infrastructure, and changes in our own practical approach to ‘reduce, reuse and recycle’. There is also a need for a proper recycling center to handle all the non-household waste. At the moment, it all ends up in the bins across the street…out of the sphere of our personal interests and care?

22 years of corporate and international investor experience as well as private sector development project management, consultancy in private sector policy and business advisory services, and direct consultancy to companies in South East Europe (and now a blogger on socio-economic issues)
View all posts by Jakob Modéer →
This entry was posted in Uncategorized and tagged garbage, Kosovo, Pristina, public services. Bookmark the permalink.