Anyone living in Pristina will know that walking in the city is risky business. Cars parked on the sidewalks forces pedestrians into the streets, where we are at the mercy of some unpredictable driving habits. We escape to Germia park for tranquillity, but Germia often feels too far away. Luckily Germia is not the only park in town.

‘Parkut të Qytetit’, central park in Albanian, is the only mature green area left in the heart of Pristina. During the 1999 war, the local population desperately needed wood to heat their houses, yet the park’s tall pine trees were surprisingly spared the axe. “We just love our park, it’s small, but we love it all the same. I walk here with my friends every morning”, exclaims Ardita, an energetic pensioner with a warm smile.

In post-conflict Kosovo, the Italian government financed the initial restoration of the park, laying new stone paths, ensuring lightening and building playgrounds. The locals nicknamed it the ‘Italian park’. Calling it ‘City park’ became popular for a while but with the construction of ‘City Park’ shopping mall, people returned to using its proper name – ‘Parkut të Qytetit’.

Parkut të Qytetit is easily reached by walking up Tringë Smajli street, crossing Agim Ramadani and later Gustav Meyer, before entering through the main gate on Hamëz Jashari street. The park is a waterhole for all generations. While Ardita and her generation of walkers move on to drink tea at one of the park’s three cafés, teenage lovers, kindergarten groups and families replace them.

“The park is the only free place in town where we can be alone”, explains a young couple (who would rather remain anonymous) half-laying against a maple tree, “at home we have no privacy with mother and grandmother around.” Down at the playground, the kids are filling in fast. The around-the-clock wear and tear by Pristina’s younger citizens has left the swings, slides and climbing bars in a sorrow state. But the decaying playground does not stop the children from enjoying themselves to the fullest. Their loud, happy laughter reminds you of a public beach in July.

The park is surprisingly well maintained and clean. “We do our best”, proclaims Ermir, a fast-moving member of the park maintenance team, “but I wish the young people would throw their litter in the bins instead of all over the park”. Like Sisyphus, Ermir will be back roaming the park tomorrow, emphatically filling his large bag with coke bottles, chips bags and snack wraps, some thrown just meters away from the park’s many litter bins.

Colourful flowers are planted every spring along the park’s main alleys, and watered throughout the hot summer.  The green lawns are cut regularly, welcoming the next generation of Kosovo football stars. The municipality is currently constructing a new basketball court. “It will be great to play on a court where the hop actually has a net”, concludes Gazmend, a tall teenager, and laughs wholeheartedly. 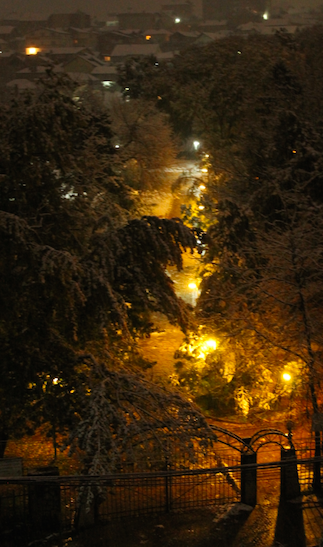 On winter days like today, the paths of Parkut të Qytetit turn into icy luge half-pipes. The gentle slopes carry the children’s sleighs through the forest to the very bottom up the park. Halfway down, the ‘Rona’ restaurant offers hot chocolate in front of an open fire, warming up both feet and soul, while you look out into a snow-covered forest. At such a moment, the Parkut të Qytetit feels more like the Brezovica ski resort than downtown Pristina.