One citizen’s struggle against illegal construction in post-conflict Kosovo

Meet Valdet Osmani, President of the Architect Association in Kosovo.

The current construction boom is resulting in over-crowded and sub-standard living areas all over Pristina. Developers’ greed and institutions’ inability to enforce construction regulations are the main causes.  Valdet Osmani, President of the Architect Association, is taking on the Kosovo capital’s ghettofication, before it’s too late.

“We are building a city without consideration for people’s health, safety and well-being”, exclaims Valdet Osmani, 39, and asks rhetorically  “Is this how we like our children to grow up – without sunlight, sidewalks and green areas?’ He speaks passionately about the Architect Association’s advocacy work against illegal construction and the destruction of the urban landscape in Kosovo.  “It’s a human rights issue, each citizen has the right to healthy and safe living. But this is hardly what the developers are offering today”. With two children of his own, Osmani feels the urgency of reversing the negative trend that is characterising reconstruction and construction in Kosovo.

Valdet is fervent when he speaks about architecture and urban planning. “Architecture is the representation of a country and its civilization. My vision is to understand history, analyse the present, and develop sustainable living solutions for all people”, Osmani proclaims. Raised in Mitrovica, Osmani moved to Pristina to pursue a university education in engineering and architecture. He then worked on international donor reconstruction initiatives for housing, hospital and infrastructure development.

This period was a real eye-opener for the young Osmani. In dealing with municipal authorities it became clear that a too restrictive response to construction permits resulted in a boom in illegal construction and perversely enough, less problems with the local authorities.

This was in 2002 and the first time Osmani raised his voice, requesting the municipal authorities to place a moratorium on construction activities in some neighbourhoods and provide regulations for not yet developed lands, encouraging investors to apply for permits.

Lashing out at Osmani, the local authority told him, “you are too young to advise us on city development”. “This was the game changer for me”, recalls Osmani. “I knew I had to get involved in the public debate about construction. I knew we had to do more ourselves, as Kosovars, to change our development path away from corruption. Illegal construction had become a way of doing ‘business’ for both municipality authorities and private construction companies. We were losing our common future. That’s why I joined others with the same motivation and drive, and established the Architect Association”, explains Valdet.

The Dodona neighbourhood, in the centre of capital Pristina, was once an oasis of one-family houses and greenery. “No more than 100 people lived here back then”, Osmani explains and points to the narrow street, “and now these non-proportional, enormous apartment blocks will host at least 2000 residents and 500 cars will try to find parking here every day.” The lack of functionality is striking.

Osmani continues to explain the physical and psychological health risks associated with over-crowded living areas. “It’s very stressful to live here. Think about it. You invest your savings in an apartment to get away from your parents or the village. You may even take a bank mortgage. But then you discover you can’t let your kids outside because of the traffic, your apartment gets no sunlight, it’s dusty, sewage doesn’t function properly and it stinks all summer. On top of that you have to carry the house waste 300 meters to the nearest garbage bin. And you will never be able to sell. You are stuck”, Osmani bellows, shaking his head in disbelief.

“This is how ghettos start”, Osmani reiterates. “Spatial planning and construction standards are systematically abused.  Laws and standards are not enforced. Inspections don’t lead to penalties, but to more corruption. The municipality adds to the misery by not ensuring adequate public services, such as kindergartens and health centers.” At some point in the future people will move out, leaving behind pockets in society with limited financial means. In turn, as fewer and poorer residents are left behind the properties will start to decay and even less public services will be provided. “It’s a vicious circle of irresponsibility, which will lead to the ghettofication of certain parts of the city”, concludes Osmani.

To Osmani the negative outcome of the current construction boom is symbolic for a state that is failing on its obligations to citizens. “The politicians in Kosovo love to talk about EU integration, but this process means adopting and applying EU rules, norms and values that uphold a functioning state, ensuring a higher quality of life and more liveable cities. Until now, we have been incapable of producing either”.

Osmani has experienced a series of failures in trying to stop illegal construction. “As citizens, we are equally to blame for the mess we find ourselves in. We failed terribly in neighbourhoods such as Peyton and Arberia. The people there were unable to organise themselves, they were very pessimistic and they did not believe us when we told them that they have rights and we will support them. The municipality authorities, on the other hand, were too weak and did not provide any regulatory plans for the neighbourhoods, leaving the field open for uncontrolled and over-dimensioned construction”, admits Osmani.

The success of the association in stopping illegal construction has so far been limited to minor violations, such as spontaneous balconies and small building expansions in Ulpiana and Sunny Hill. In these cases, the municipality has reacted. “But we are filtering mosquitos and letting through the elephants”, exclaims Osmani. “In order to stop the larger violations, those that ruin entire neighbourhoods, forever, citizens must join together as they did in Istanbul and demand a stop to illegal construction.

As an association of architects, we can support such citizens’ initiative, but we cannot drive the cause, that’s the job of the people, and that’s their right within a democratic society”, proclaims Osmani with mixed feelings about the future. “In Mitrovica, we succeeded in stopping the construction of a restaurant in the green area of the town”, Osmani remembers, again sounding more optimistic about what can be achieved when motivated citizens join forces and take common action.

“Then there are those few developers, who we have managed to convert from illegal to legal construction”, Osmani informs with some satisfaction, “I cannot disclose their names, because they don’t want to admit any past illegalities, but the buildings included both residential and commercial activities. The main reason they turned legal was to avoid future problems with the law and not to risk their investments, minimize the corruption exposure and official threats for demolition”, explains Osmani.

“Have a look at this sketch”, Osmani continues, “this is what any street in Dodona or Peyton neighbourhoods should have looked like, had construction laws, standards and rules been followed”. The differences between theory and practice could not be more striking. Despite all laws and regulations claiming to protect them, trees and sidewalks have been swallowed up by abnormally large concrete structures, built too close to the street. “It could have been a wonderful place to live, full of air, light and space to walk, even for children and old people”, asserts Osmani with obvious frustration in his voice. 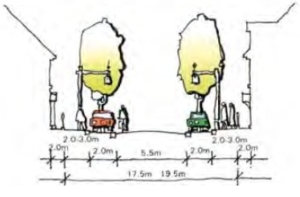 The continuous frustrations in working with irresponsible authorities and greedy developers, the many lost struggles and few victories have shaped Osmani’s character. “He is more direct in his language now, sometimes very direct in calling for rule of law and professional competence, especially when dealing with incompetent civil servants. He presents facts and truths in face to face discussions, which some may perceive as a too personal of an approach. But it’s all too personal in the Balkans, you know, we have problem dealing with each other as professionals”, describes Bujar Prestreshi, a close architect colleague to Osmani.

In Pristina, the association estimates that 50.000 housing and commercial units are constructed illegally and 80% have no occupancy permits. The legalization process is extremely slow. “But we cannot put all blame on under-paid civil servants. As professionals we have to uphold some kind of professional standards ourselves”, admits Osmani. In response, the association is proposing a licensing process for architects and is drafting planning and construction rules for architects to respect. “We may not be able to change the current situation, for some streets it’s simply too late. But we must strive to save the future”, concludes Osmani philosophically, “We owe it to our children, otherwise we are bound to lose them to emigration”.

Osmani speaks from personal experience. “Brain drain is a serious threat to our hope of building a normal European state and society”, tells Osmani, highlighting that in recent months two well-educated friends have left for Canada with their families, and others are working hard to follow suit. “They will never be back, the brain-drain will continue , unless we make away with our corrupt practices and give normal, hard-working people a chance to succeed”, he concludes disappointedly.

Osmani treasures his time with family and friends, but even away from the daily struggles of the Architect Association he tries to contribute to society. “We are a shrinking group of friends that take time every other Sunday to clean up litter in Germia park.” In a period of intense individual wealth accumulation, fundamental ideals such as community development and volunteerism are on the back-heels in Kosovo.

“We could all do so much more as individuals, as citizens”, reiterates Osmani, “simple things like throwing litter in the bin and not park the car on the sidewalk. As citizens, we have responsibilities, not only individual rights.” But as long as a few individuals’ rights are perceived as more valuable than others, then elitism, favoritism and nepotism will continue to flourish and destroy human rights, community values and turn neighbourhoods into ghettos. The children of Kosovo will not be happy about that.

22 years of corporate and international investor experience as well as private sector development project management, consultancy in private sector policy and business advisory services, and direct consultancy to companies in South East Europe (and now a blogger on socio-economic issues)
View all posts by Jakob Modéer →
This entry was posted in Uncategorized and tagged illegal construction, Kosovo, Pristina. Bookmark the permalink.